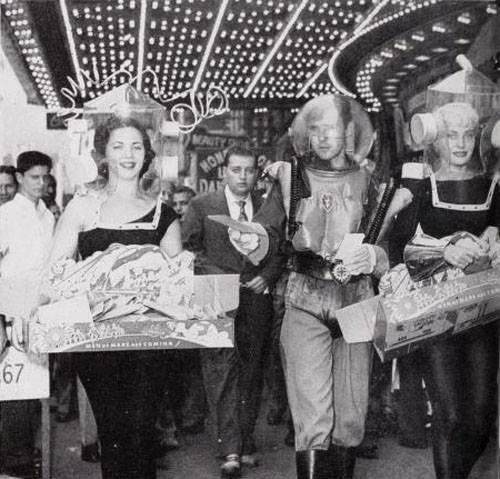 SCI-FI SIDEWALK STUNT - This photo appeared in the September 7, 1953 issue of the Independent Exhibitors Film Bulletin and carries the caption, “The New York Mayfair stopped crowds on the sidewalk, in cooperation with Paramount, for the opening of War of the Worlds. The special kit, put out by Archer Plastics, are being carried by two models and a ‘spaceman.’”

The War of the Worlds playset is a very desirable items for toy collectors, usually fetching around $2,000.00 for a complete set.

Incidentally, the “spaceman” is wearing (–he has the “oxygen tanks on backwards–) a Space Patrol Outer Space Helmet manufactured by Beeman Plastics. This 1952 toy often is valued between $750.00 to $1500.00, depending on condition and whether it is in its original, illustrated box.