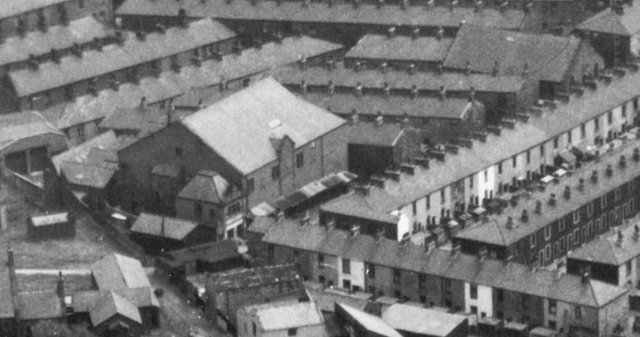 1951, 30 July: the Imperial is caught from the air, tightly hemmed-in in the densely built-up Gannow Top area of Burnley. The entrance block still sports the truncated pyramid roof and pediment; and the canopy on the Shale Street side is visible and it steps down the slope of the street.

The canopy was removed many years before demolition. The historic buildings surveyor, called in whilst initial preparations for demolition were in hand, observed the canopy anchor points and reported them to be metal ties holding the circle structure to the Shale Street wall.

When erected, the cinema must have deprived the adjacent houses of much daylight.

The entrance block was obviously aligned to face straight down the length of Redruth Street to the busy Padiham Road, from where it was visible to passing trade. Hence, why the Imperial always advertised as being on Redruth Street and not Shale Street.

There was one show that day, at 7-15 pm: Stephen Murray, Kay Walsh and William Fox in “The Magnet” (U) “Also News and Full Supporting Prog.”