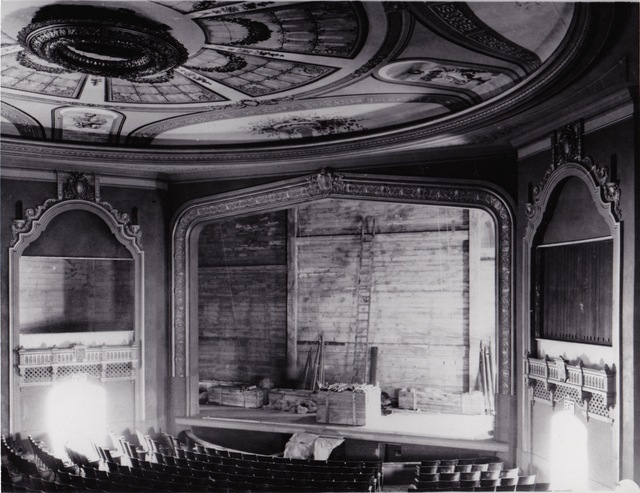 In this 1927 view, finishing touches are being put on the auditorium. The organ has been installed, and its console–covered with a tarp–is seen in the pit. Swell shades for the chamber on the right indicate the heart of the organ has been installed, but the ornamental plaster grilles have yet to be inserted in front of the chambers. The chamber on the left may have been left empty. Many smaller theatres had matching chambers, but if the instrument was small, it might occupy a chamber on only one side. This photo affords a fine view of the high quality paint scheme of the circular lighting cove in the ceiling. Maidens, garlands, swags and urns of flowers create an airborne garden effect. Instead of a chandelier, an ornate plaster wreath-like ring, containing many lightbulbs, serves as both a focal point and additional source of illumination. It was removed in the later redecoration, but an identical feature remained in Reid Bros.‘ Amazon (Apollo) Theatre until it was gutted. Jack Tillmany Collection. Posted with permission.