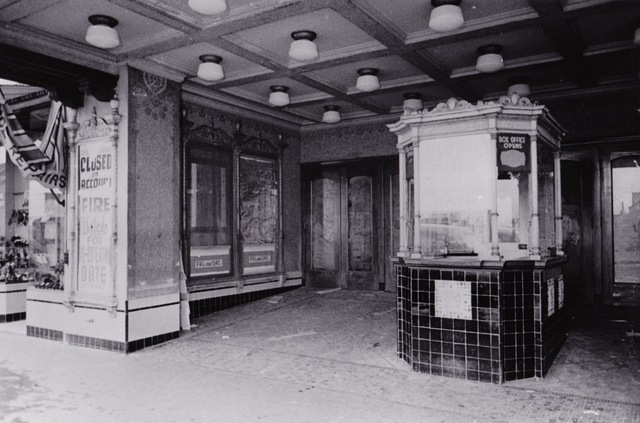 This view of the ticket lobby, box office, and front doors was taken when the Avenue was closed due to a fire. The theatre would ultimately be given a new vertical sign–identical in style to that of the Metro Theatre on Union St., and a simple, wedge-shaped marquee, and remodeled ticket lobby. The original doors were outfitted with new glass, featuring etched nude maidens holding orbs, legs bent under them, with large flowers behind. This motif would repeat in painted form on murals which would replace the organ fronts. Approximately fifty years later, when the Avenue became a church, congregants deemed the etched nude figures inappropriate, and so they were sold to architectural salvage specialist, Mark Santa Maria, along with the inner set of original mahogany doors, and were soon sold to actor Kevin Spacey.

The above photo is from the Jack Tillmany Collection, and was posted with his permission.