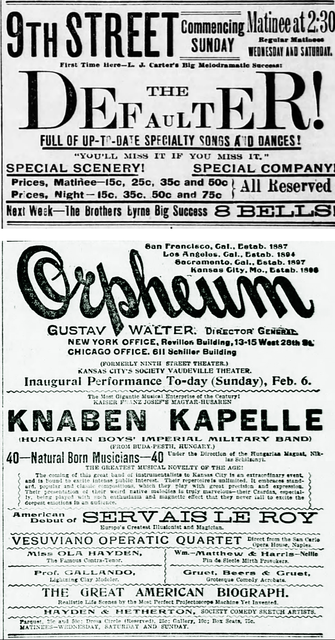 When H.D. Clark’s Ninth Street Playhouse operated by Judah and Hudson was completely destroyed in a fire in January of 1893, new plans for a follow-up theater were already in place. The “New” Ninth Street Theater (ad above) was built and opened in November of 1893.In January of 1898, the Great Western Vaudeville Association announced that it was taking a 10-year lease of the property to create its fourth ever Orpheum following San Francisco, Los Angeles, and Sacramento. A standing room audience with “hundreds turned away” showed up to the first show advertised here (ad below) on Feb. 6, 1898.