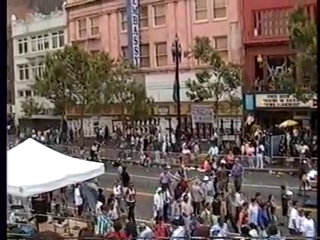 This is a still frame from a videotape I made in 1992, showing the Embassy Theatre, which had closed after the 1989 Loma Prieta earthquake. It was demolished in 1994. As of this writing, it’s an empty lot.

Thanks Bob for the video still frame photo. Yes they took the old Embassy down fast almost in the middle of the night. I think the roof earthquake repairs could have took place but the owners wanted a fast way out. Now many years later It’s just a empty lot next to the new ACT Strand Theatre. The Embassy had just had a small remodel done with curtains and stereo sound and was a great place to see second movies at a cheap price. SF has no bargain run B theatres now. It was a little seedy at times with all the street people but that is what made It fun like a old big grindhouse. Much larger then the next door Strand It had a nice size CinemaScope® screen, the huge balcony was never open much. You could hear the sound of wine bottles rolling down the aisles at most all shows plus many people from the street sleeping and snoring all the time. I had to wake up many people some of the times so I could enjoy the film better. The Embassy was the place to go to catch a film you missed and you had all the inside drama going on around you. Gone are these fun movie times in San Francisco CA.