Ali at the Rodeo Drive In, Watch or he'll knock you out! 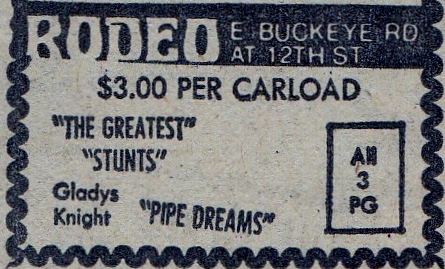 AZ Republic newspaper Ad for a triple feature at the Rodeo Drive-In in Phoenix Arizona. This ad is from 1977. Heavyweight Champ Muhammad Ali in his own film titled “The Greatest” is the main feature. The double feature is the much traveled action film “Stunts” and something with Gladys Knight called “Pipe Dreams” rounded out the bill. PG friendly films for the family.