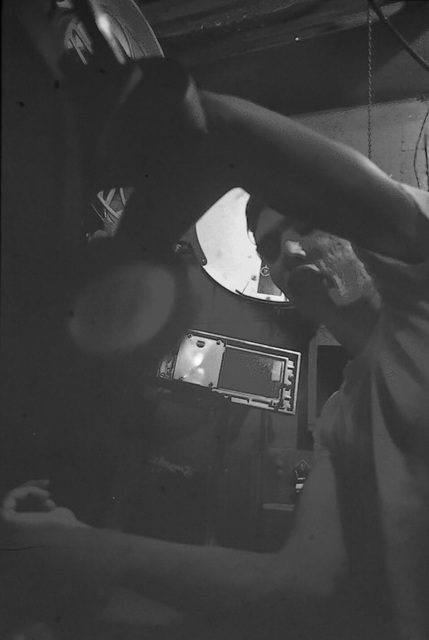 Here you have Bruce Sanders, projectionist exemplar. He was totally dedicated to presenting the best screen image and sound any piece of cinema equipment could deliver. His shows in the great movie places where he work were always impeccable, and his dedication to giving the best show to his audience never wavered throughout his career. Bruce’s knowledge of all things cinema, from theatre engineering and booth design, to equipment design and operation, to film and best projection practices, to overall showmanship was as good as you would find in the top studios in Hollywood and at the drawing boards of the equipment manufacturers.

Over the course of his long career which started when he was a teenager, literally millions of theatre patrons all over the five boroughs of NYC enjoyed movies that he either projected himself or benefited from his expertise in installing and aligning projection and sound equipment to their highest specs …equipment that ran the shows which those millions watched and heard in his theatres. He was attentive to the smallest detail and many times couldn’t be pried away from the projection booth until the wee hours of the morning as he labored to get it perfect. When it was a problem that would degrade the sound or picture, he was a rottweiler refusing to let go of a bone until he resolved it. And he was worse than a rottwiler when it came to theatre managers and owners who would settle for mediocre; Bruce was the patrons' advocate, always fighting again the “it’s good enough” mindset.

The picture above is both memorable in that it was taken when he was a youngster and in the projection booth of the movie palace that he loved so much, but which cause him such anguish when it met it’s end with monumental indignity. He fought hard to keep the Keiths from being demolished along with so many others who even to this day cringe to know how such a beauty could end as badly as it has.

This picture is also sad because as much as Bruce labored in love over his projection booths, he could not fix his long battle with smoking, an addiction that he readily admitted was the cause later in life of his battle with emphysema, to which he would succumbed in 2015. As he once told me when he knew what was coming, “It was a good run, Frankie…not many regrets; no one could have wanted a career as satisfying as the one we were lucky enough to fall into.” He was right of course…to love your work the way he did and enjoy the satisfaction he often said he derived from it means you don’t ever work a day in your life.

Unfortunately he did lament the final days of the demise of film and was much less a fan of digital, first because of the way it eliminated that intimate relationship with the projectionist and his “running of the show;” there is no projectionist running the show with digital. But given his genius for understanding technology, Bruce still became thoroughly knowledgeable with the new digital projection systems; as far as “running the show,” he also understood that being a projectionist which gave him so much pleasure, was gone with the wind. He found that very sad personally. He was happy to no longer be “in the booth.” He once said, “Guess we will leave the showmanship to automation and the machines.”

Here is the unsung hero of the quality of what an audience saw on the screen and heard in the theatre. All that creative, artistic and highly skilled technical work that you see represented by the thousands of names in the credit crawls at the end of the movies, it is all distilled down to the knowledge and expertise and dedication of one person in that projection booth who is “running the show.” Either he/she knows what they are doing and are conscientious about doing it to perfection, or they can ruin the experience for an entire audience, no matter how great the filmmaker’s work is. Bruce’s name will never appear on the screen in a credit crawl, but he nevertheless is fully responsible for making what those moviemakers put together on that strip of celluloid film come to life for the viewer…he and other projectionist like him were the last person in the the long chain of what happened in front of the camera lens to what you see on the screen. He’s the last technician…he is The Projectionist.

We are much richer for having known him…my colleague and good friend,