March 1955 photo courtesy of the Lost Ottawa Facebook page, via the City of Ottawa Archives, CA037292. 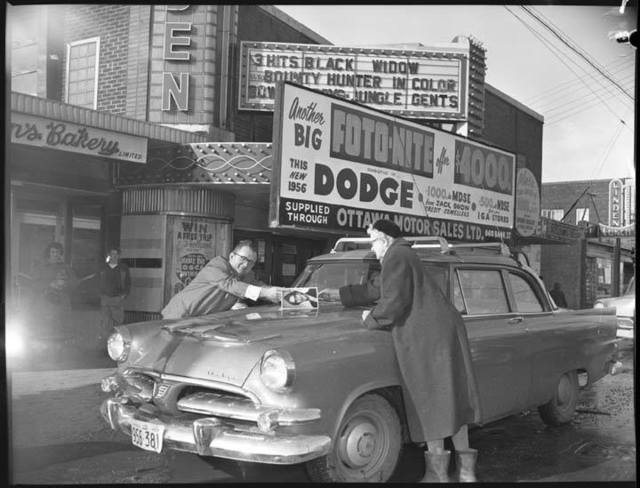 Mrs. Armstrong exchanges a photo with a Mr. Sweedlove over the hood of a Dodge in front of the Linden Theatre in March of 1955. The Linden turned into the Towne in 1968, and was one of Ottawa most popular repertory houses (later becoming the Bytowne on Rideau).

Mrs. Armstrong was the winner of a “Foto-Nite” contest, in which the Linden, Centre, Eastview, Francais, Glebe, Somerset and Westboro theatres all participated.

As near as I can figure out, you took a photo with you and filled out a registration card when you saw a movie. If your photo was pulled, and you had seen a movie at the theatre (or at one of the participating cinemas) that week, then you could win a cash prize, or even a car.