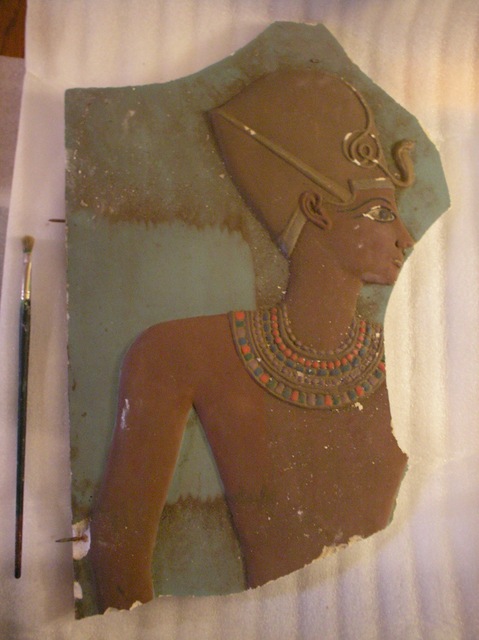 One of a series of plaster wall relief fragments which were given to me several years ago by the Hearst Museum of Anthropology at UC Berkeley. A woman had given the fragments to the Hearst years before, thinking perhaps students would get practice in restoring antiquities via these pieces. The museum accepted the pieces but did not accession them. They were told they were part of the decor of a Bay Area movie theater. Museum staff who are friends of mine officially presented the fragments to me, as they had no use for them. Following some detective work, I have strong reason to believe these come from the Alexandria. No other Egyptian style Bay Area theater had a design meriting plaster work of this quality, and publicity at the time of the Alexandria’s opening specifically mentions artwork in the theatre which was authentically copied from actual Egyptian sources. All of the fragments I have are traceable to actual Pharaonic originals. This fragment is copied from the top of the obelisk of Hatshepsut at Karnak Temple, for example. Additional fragments make up the complete kneeling figure. This photo shows the piece as I was beginning to clean it. Many of the fragments show evidence of having been confined, when still in situ, in an area where they were subjected to moisture which could not rapidly evaporate (mildew, lime deposits), such as would have been the case with original lobby walls known to have existed behind the Alexandria’s present (1940s) lobby walls. My guess is that these fragments were gathered when some of the original lobby walls were demolished from behind when the storefronts along the Geary frontage were remodeled some years back, and the fragments were gathered-up at that time by someone who cared enough to save them.