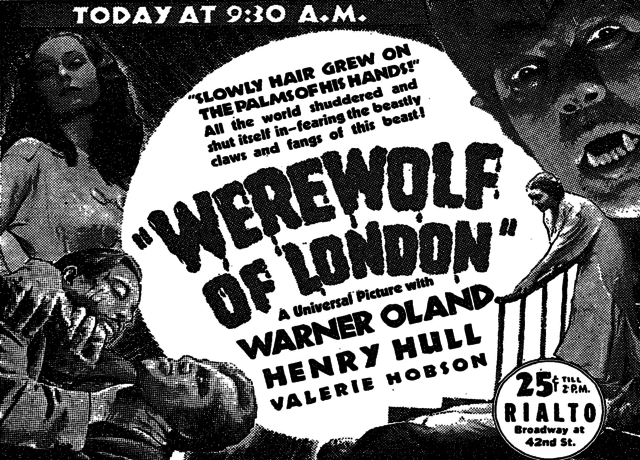 The chiller ran for one week only, with the Rialto closing forever after the last evening performance of May 15th, 1935.

Here are excerpts from the NY Times review of this house’s last picture, “Werewolf of London”

The Rialto Theatre, which began its career as a picture house on the night of April 22, 1916, by showing Douglas Fairbanks’s “The Good Bad Man,” is bidding farewell to Times Square this week with a nerve-jangling exhibit called “The Werewolf of London.” The theatre will be demolished after the last screening of the picture next Wednesday night, but a new Rialto will be erected on the site and open its doors to the public some time in October.

Designed solely to amaze and horrify, the film goes about its task with commendable thoroughness, sparing no grisly detail… Granting that the central idea has been used before, the picture still rates the attention of action-and-horror enthusiasts. It is a fitting valedictory for the old Rialto, which has become melodrama’s citadel among Times Square’s picture houses.