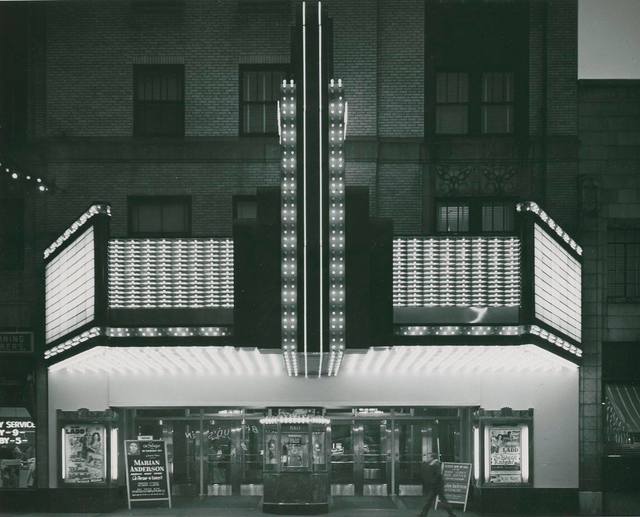 Pictured here is a December 1954 image of the RKO Theatre. The billboards announce a concert by Marian Anderson as well as the movie “The Black Knight” starring Alan Ladd, Patricia Medina and Andre Morell. Appearing in reverse, as a reflection in the glass of the front doors, are the words “Brud’s Tavern” from the neon sign across the street. Brud Cawley’s tavern was located at 115 E. Third street from 1942-1968, when it moved across the street to 130 E. Third St.

A month after Marian Anderson appeared in Davenport in December 1954, she was hailed on January 8, 1955, as a new star for her dramatic operatic debut with the Metropolitan Opera Company. The Negro contralto was the first of her race to sing a leading role with the then 71-year-old company. She received a loud and prolonged ovation from the “standing room only” audience when she appeared as the sorceress, Ulrica, in a revival of Verdi’s “Un Ball in Maschera” (Masked Ball). She was 47 at that time and could sing in nine languages.