Panel in the ceiling dome of the Riverside 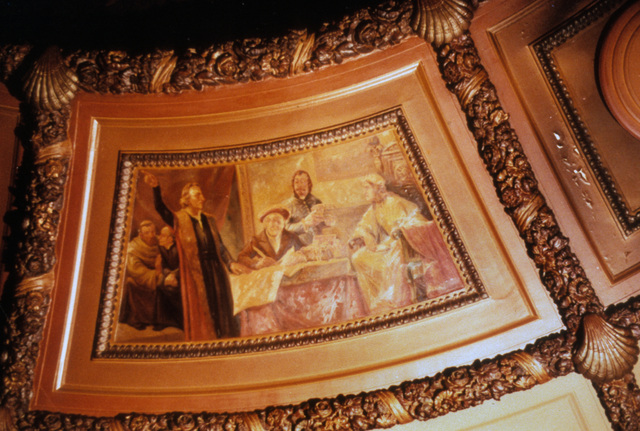 The panel appears to depict Christopher Columbus declaring the earth to be round and his desire to sail the ocean blue in the year 1492. As a child I spent a great deal of time in the Riverside and it’s neighbor the Riviera. The theaters were dark and the balconies were closed and you could barely see the sounding board above the proscenium or ceiling, but you knew that there was something up there. If you stared long enough you knew.

The panel just to the left was altered when an air conditioning vent was added. These panels where around the dome.

For Movieplace I can’t put down the piece you sent to me. I try doing other things, then find myself mesmerized among the words and photos time and time, again. NOTE: I know the very place you are talking about, where Bogey lived as a boy. it is probably the most secret street , if you want to call it that, in the city. As a boy,I used to work, after school (Holy Name on 97th & Amsterdam) for Al Deluise. He had a produce store on 95th and Columbus. I was an all around helper and part of my job was to deliver the orders to our customers. Not all, but the “special folk” who lived between Broadway and Riverside Drive. So, I knew the area very well. A few of my customers lived in those tiny buildings where Bogey lived as a youngster. Most people didn’t even know that charming little street was there and it was not opened to the general public. I may be wrong, but I think his parents were a pianist and a surgeon. By the way, Al DeLuise was the uncle of Dom DeLouise who would stop by occasionally. I worked for him at the same time I was an usher at the Riverside. After closing the produce stand, I’d run over to the theater. Next story will be about Alice Faye, whom I’m sure you know. Manhattan Marty.