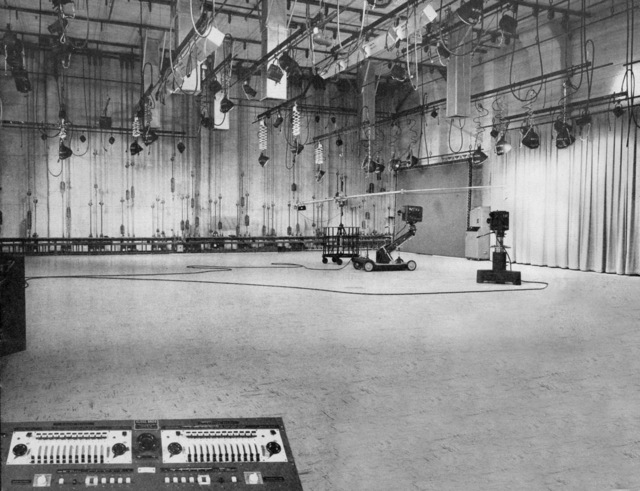 This view toward the southwest corner of Studio A at WTVJ (the largest TV production “plant” in the southeastern US when it was built) shows how the stage and house of the Capitol Theatre were renovated.

The 7000 sf studio included a counter-weighted flying system along the south wall (very rare for a studio outside of New York or Hollywood) which allowed the Kleigl lighting instruments to “flown out” to their full height of 35', keeping the entire floor clear for shooting. The studio lighting system control panel is shown in the foreground.

Also visible are the large air conditioning ducts required to move the volumes of cold air needed to cool the bright lights slowly enough that the air’s movement would not be picked up by the sensitive microphones.

The floor of the studio was supported by newly poured columns and placed 15' above the level of the old theatre floor and stage, creating a space for offices beneath the studio.

This extra 15' served the station well during Hurricane Andrew in 1992, allowing it to continue using its studio when the storm swells raised the water level into the streets and lower levels of the building.