Yul Brynner at The Alabama 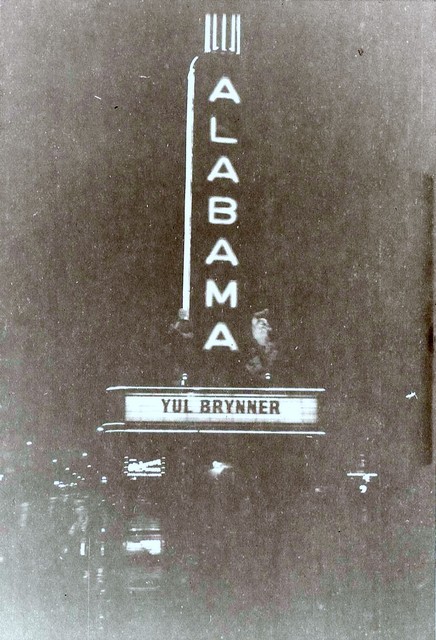 The Alabama sign on South Shepard has been a landmark for amost 75 years. With all the neon gone and little care by owners Weingarten Realty,in it’s best times, it was decorated to fit the movie. It’s hard to mak out, but there are two characters on the left an right of the lower A.

I think this was for the movie “Once More with Feeling” in 1960.

Once More, with Feeling! (1960) is a British comedy film directed and produced by Stanley Donen from a screenplay by Harry Kurnitz, based on his play. The film was released by Columbia Pictures and has music by Franz Liszt, Ludwig van Beethoven, and Richard Wagner, arranged by Muir Mathieson. The cinematography was by Georges Périnal and the costume design by Givenchy.

The play Once More, With Feeling which was adapted for this film, opened on Broadway on 21 October 1958 at the National Theatre, in a production directed by George Axelrod and designed by George Jenkins, and starring Joseph Cotten, Arlene Francis, and Walter Matthau, who was nominated for a Tony Award as Best featured actor. The play ran for 263 performances.

The film was Kay Kendall’s last. She died of leukemia on September 6, 1959, prior to the film’s release.

Nice photo and story,thanks for posting.