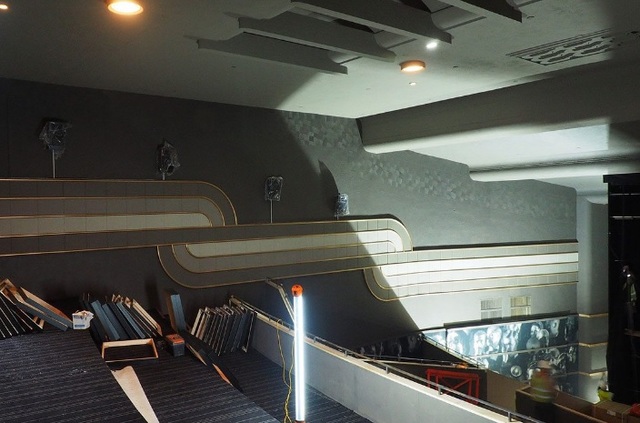 Refurbished Screen 1 of the former York Odeon now Everyman from the top of the former circle, extended to the procenium arch, This screen now seats 144. Copyright to Yorkmix

First off, a big “Thank you” to Michael and all those who have posted their excellent views from behind the scenes as the Everyman project continues to transform the former Odeon.

Intriguingly, this view shows that not only has 1972’s ill-advised balcony extension disappeared but the 1937 balcony appears to have actually receded by several yards. The original balcony’s forward termination coincided with the end of the completely straight length of the acoustic tiling feature and below the point at which the outer edge of the central band of the feature ends its downward turn through 90 degrees. This would account for the seemingly drastic reduction in capacity.

The orchestra pit rail was replaced by a wall in 1964 and this has not been visible from this vantage point since the 1972 tripling yet, here it is.

There would appear to be some kind of fine structure beyond the new balcony front, sloping screenwards, and I wonder if this will support the “roof” of a slight forward extension of the two auditoria below the balcony in order to increase the distance between audience and screen while accommodating extra space between rows, larger seats and perhaps slightly larger screens from a longer throw.

There is no sign of any part of the proscenium arch in this view, only part of the number one lighting cove several feet away from the hidden arch. It was ironic that in 1964’s modernisation here, the proscenium arch was lowered by just under two feet when, just six years later, the balcony extension necessitated lifting the image for sighting purposes and consequently having to make the picture smaller.

All will soon be revealed as this art deco gem enters yet another phase in its career. Good luck to Everyman whose confidence and scale of investment will serve to show Reel just what “…returned to its former glory” really means!

Update: The “…fine structure,,,sloping screenwards” is actually a flight of stairs leading down to the former front stalls exit (copied exactly on the other side of the auditorium). From the bottom of these stairs, the proscenium arch can be seen behind the present screen; black masking curtains hang from the house tabs track and effectively seal off the Odeon stage area.

The two cinemas in the old rear stalls remain the same size but I believe the screens are positioned slightly forward of their 1972 position.