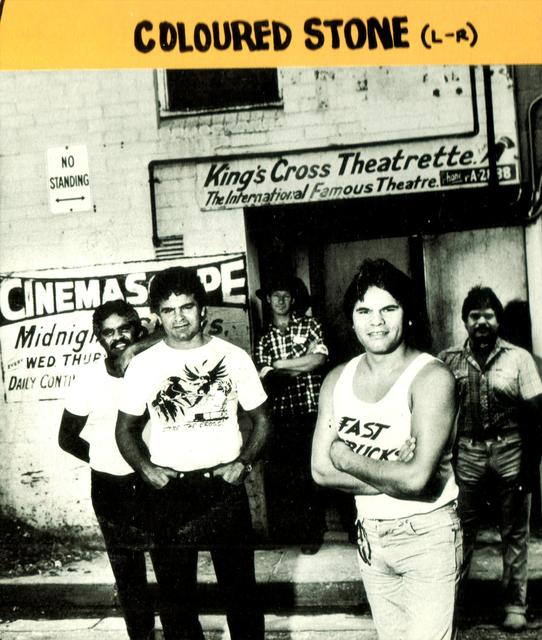 A unique promotional photo featuring the band “Coloured Stone” taken from their 1986 LP record cover (Coloured Stone – Black Rock from the Red Centre)– It shows the exit door & signage for the long gone “King’s Cross Newsreel Theatrette.” – This features the CinemaScope logo & session times painted on the lane wall – All that’s left is the memory of what was once a flourishing Newsreel Theatrette, which played continuous sessions on a six day basis. The Theatrette was opened in 25th, July 1941. In the early years it featured a neon sign over the facade. The actual auditorium was upstairs in a two story building. When demand for the news faded the neon came down and the theatre ran conventional double bills, mostly action features, with cartoons and serials. Until finally the theatre went dark.

Coloured Stone is a band from the Koonibba Mission, west of Ceduna, South Australia. Their sound has been described as having a unique feel and Aboriginal (Indigenous Australian) qualities. – Contributed by Greg Lynch –