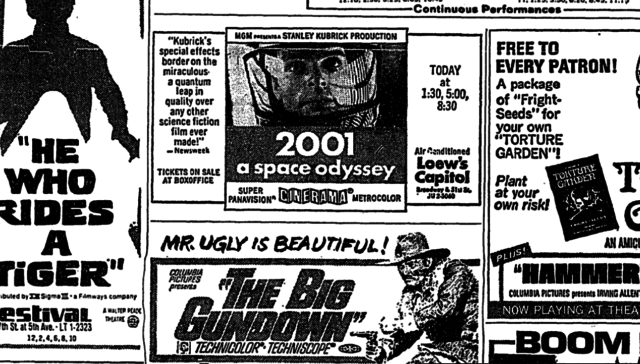 One good thing about being 64 years old: I was able to see 2001 at the Capitol, on the amazing Cinerama screen.

You’re right about that at 63 myself, nee 1956, I spent one morning in the New Penthouse Theatre upstairs not realizing that the year before it was the Strand Theatre before renovations. The movie was “FINIAN’S RAINBOW” on a school trip from Shallow JHS with all the mosic and choral students at the time at 10A.M., we had lunch at the automat next door. Yes it was quite fun for the $1.00 we paid (for the movie). When people tell me to forget the past, I never talk to them again. Those who didn’t live it shouldn’t talk about it … they have absolutely no idea of the time it was. The Cinerama had “Ice Station Zebra” The final roadshow at the Strand was “Camelot” and then the film “The Green Berets”. They did not close during the twinning except for a week before the opening of the new Broadway triplex.

I remember reading about how the triplex was created without closing down the Warner (Strand) Theatre. It didn’t seem possible. I’ll post the ad describing it on the Strand page.

Here is the link to that photo.