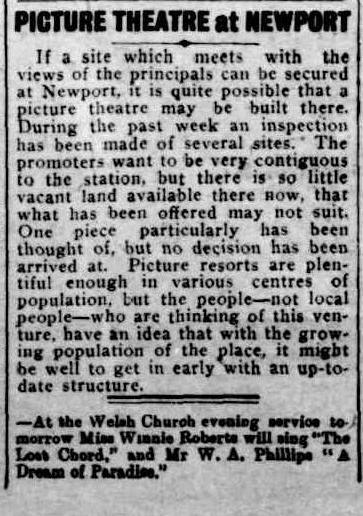 On Dec 20, 1913 the Williamstown Chronicle announced that because of the growing population an inspection had been made of several suitable sites to build a picture theatre. The principal thought that it would be an advantage if it was close to a railway station.

Ten years later the Williamstown Cronicle reported - After gaining council approval, the Newport theatre at 435 Melbourne Road Newport will open on Monday March 12, 1923 with the debut feature film from Paramount Pictures “Blood & Sand” starring Rudolph Valentino. The manager Mr Dark feels that the combination of star, story, director, cast makes it one of the greatest picture of all time. Also on the same bill Thomas Meighan & Theodore Roberts in “If You Believe It, It’s So”, Patrons are advised to book for opening night at Newport Theatre.