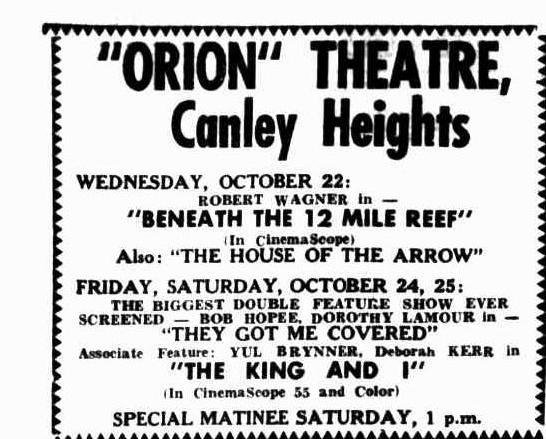 The Orion theatre at 282 Canley Vale Road, Canley Heights opened on Monday March 31st 1958 to turn away crowds with a double bill from Universal Pictures, consisting of Thunder Bay starring James Stewart, and Bonzo Goes To College. This was the culmination of nine months of back breaking work for Fred and his friends, who had constructed the building over many weekends with hammer, nails and a welding torch. The Biz (Fairfield NSW) newspaper reported “The Orion was officially opened by Mr. N. J. Mannix, State member of Parliament for the district, who complimented Mr. Hawkins the proprietor on his tenacity and enterprise, along with the very comfortable appointments of the new theatre. This will serve our growing district for many years to come he extolled. Mr. Fred Hawkins expressed his thanks to all and announced that the theatre would operate every night of the week, with a complete change of program three times weekly.