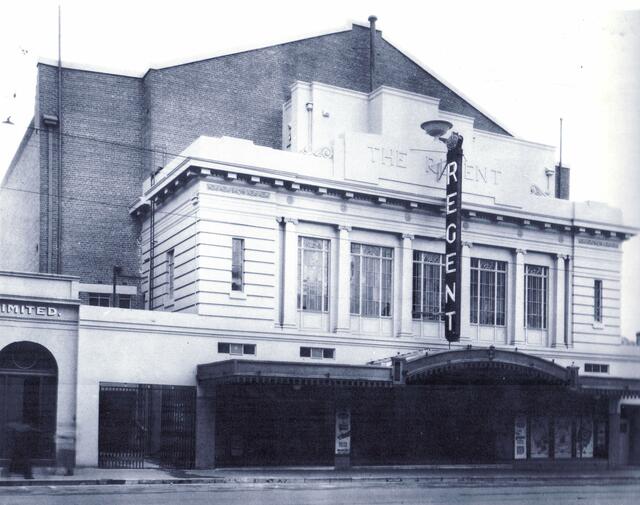 Ballarat’s Regent Theatre opened in 1928 joining the Regent family which already had cinemas in Perth, Adelaide and other cities across Australia. In 1929 the Regent Theatre Ballarat was reportedly one of the first theatres in the state to have the equipment necessary for the new ‘talkie’ films. A feature in the Weekly Times reckoned that the technology would have ‘rapid advancement’ as it developed and became popular.

The theatre was always used for more than just screening films. During World War 2, it was the venue for armed services’ recruitment drives, and was the place used by many politicians for election rallies and the like.

Until the big fire that gutted the building in 1943, the cinema could seat over 1900 people. But money was found to rebuild the interior after the fire due to its important role in the ‘entertainment of soldiers and war workers’.

In February 1951 – to mark the centenary of the discovery of gold in Victoria – they showed the premiere of Hollywood’s ‘Gold Fever’ directed by John Calvert.

The Regent was closed in the 1960s, but then bought by the Anderson family in 1974 and reopened in 1976 with a screening of Gone with the Wind – how appropriate! It was one of the first cinemas to convert to multi-screen in the 1980s, but they have managed to retain the sense of history and magnificence, even while adapting architecturally and technologically to the 21st century - Courtesy Vintage Victoria website.