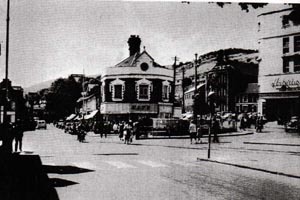 The cinema can be seen to the right. The cinema was demolished and a Tesco store built on the site with the entrance brought to the front in line with what is seen as Mays shop. In this picture the Workmen’s Hall can be seen in the distance to the left of the Astoria. The Workmen’s hall became a cinema when the Astoria closed.