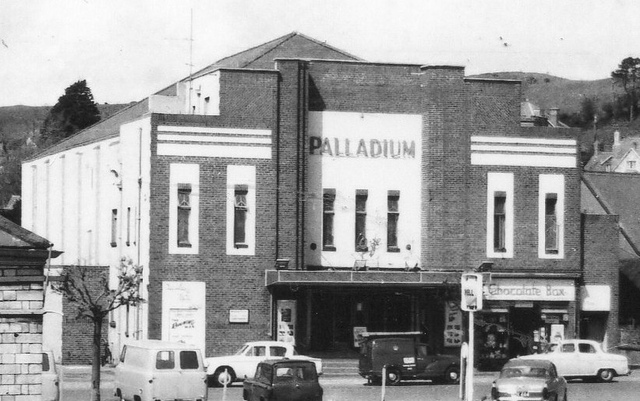 Acknowledgements to “Mister Reel” who features this very interesting photo on his Flicker site and says it was taken in May 1964. The film depicted on the poster is ‘The Running Man’ starring Lawrence Harvey which was released in 1963.The vehicles in shot are a Ford Thames van, a Hillman Minx, a Ford Anglia van, a Post Office Telephones Morris Minor van, a Vauxhall Cresta PD emerging from the Shell filling station and, outside the Chocolate Box, an Austin A55 Cambridge. The bike leaning against the side wall if the Palladium belongs to the manager Jack Lewis who used it to commute to work every day from Manor Avenue, South Beach.

I’d better own up David, Mr Reel is yours truly, This photo could not be done today (assuming the Palladium was still standing of course)as it was taken from an upstairs window of what is now a ladies hair salon on the Maes. at the time it was my father’s grocer shop and I grew up there, the site in front of the Palladium is now occupied by the Spar & Iceland supermarkets, which of course would have obscured the cinema.

The open space had previously been the site of Russell Bros garage, which meant the cinema could only be seen from the shop for about 4 years after the garage was demolished.