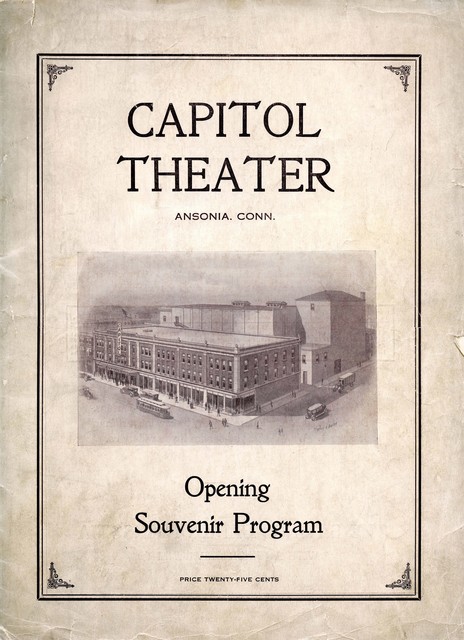 From the Program: Capitol Theater History The site of the Capitol Theater originally consisted of four pieces of property that were in the possession of four well known families for a great many years. It was on this site that the late George Hotehkiss first started in business in 1859 and carried on a successful enterprise. The Capitol Theater stands also on the Sperry property and the old town lockup. The fourth part consisted of the Walsh property on Canal street, which was owned since 1871 by Mrs. Walsh. All these estates were purchased by Mr. I. J. Hoffman in July, 1917, and combined to form the site of the Capitol Theater. The wrecking of the old structures and the construction of the new was begun simultaneously at different points on February 2nd, 1920, by Sperry & Drake, of New Haven, general contractors, with Mr. Thomas Kelly superintendent of construction. The structural steel was furnished by the Porcupine Company, of Bridgeport; ornamental iron and fire escapes, by the Standard Iron Works, of New Haven; the copper and sheet metal work, by Himmel Brothers, of New Haven; the roofing was done by James B. Kelly, of New Haven; the electrical work by Hoffman & Elias, of New York city; the metal lathing, by Henry Peters, of New Haven; the plain plastering, by John E. Landeen, of Hartford; the or¬namental plastering, by Charles E. Braies Sons, Long Island City; the carpets were furnished by the Ansonia Furniture Company; the Hall Organ Co., of West Haven, installed the organ; the lumber was furnished by the Ansonia Lumber Company and the United Lumber & Supply Company; the mason materials, by the Seymour Commercial Company; J. J. Keefe, of Ansonia, installed the plumb¬ing and heating; the art glass was furnished by Richard Spiers, of New York City; the electrical fixtures, by Black & Boyd, of New York City; the seats, by the American Seating Company; stage rigging and draperies, by William Camph, of New York City; scenery, by LeeLash Studios; the theater decorating was done by Margiollotti & Battisti, of New York City. The office building decorating was done by Frank Volanthe, of Ansonia. The plans for the Capitol Theater and office building were drawn by Archi¬tects E. C. Horn Sons, of New York City, and the engineering work was done by Fred Meister, also of New York City. The roof of the theater was completed on September 1st, 1920, and then work was rushed until the opening of the Capitol Theater. The Capitol Theater seats about 1,900 persons and is equipped with every convenience known to modern theater construction. The Capitol Theater is de¬signed to handle vaudeville, motion pictures, and road shows of any magnitude. The ventilation is taken care of by the Monsoon Cooling System of huge blowers and exhaust fans and the heating is accomplished by two giant boilers. The music for the new Capitol Theater was given especial attention. A large Hall Three-Manual Organ is one of the main features of the theater. The management will aim to make music one of the features of the program.