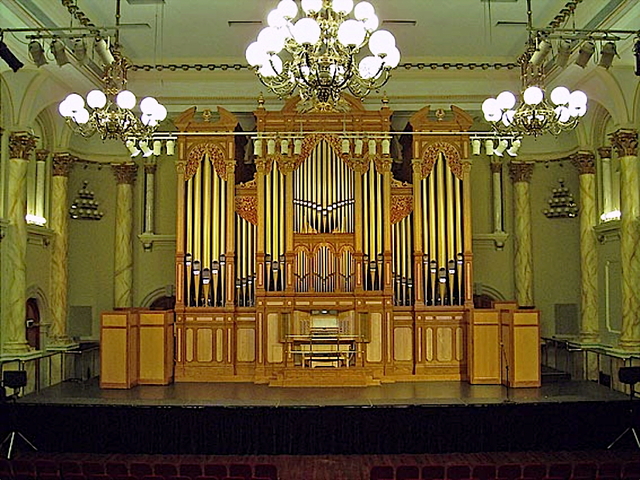 This picture of the Town Hall’s auditorium, taken from the City Council web site, shows the modern mechanical action Walker organ, the largest such instrument built in England for over 100 years. Of English Romantic design with strong French influences, and such refinements as electronic capture action and key pressure control. It replaced the fine 1875 Hill and Sons organ which had been ruined by attempts to make it conform to the neo-Baroque fad of the late twentieth century.

Happily the Hill is well on the way to being restored as nearly as possible to its original condition, and is being installed in the Tanunda Soldiers' Memorial Hall (once used as the town’s cinema) in the famous German/Australian Barossa wine valley, just outside Adelaide’s northern metropolitan area.

The Town Hall is the preferred venue for symphony concerts rather than the Festival Theatre (which has a large Austrian baroque Rieger Orgelblau organ which can be moved on and off stage on air cushions by two men) and other concert halls. This is because the Town Hall is numbered among the five auditoria which are regarded as having the world’s best acoustics for orchestral music.