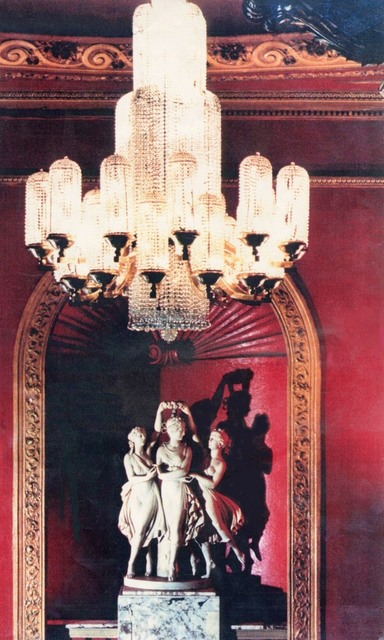 The large 3 metre tall Art Deco chandelier in the foyer of the Regent Theatre was originally designed by Georges Chevalier and was the centrepiece of the Baccarat/Christofle pavilion at the 1925 “Exposition Internationale des Arts Decoratifs et Industriels Modernes” in Paris.

The chandelier was sold after the exhibition and sent to Australia where it was installed in the foyer of the Regent Theatre. The Regent opened in 1926 and was demolished in 1990.

The chandelier was salvaged and stored by the Regents owner in a city basement for 20 years. Learning of its world significance he had it reassembled in 2009 and restored to prepare it for sale.

In December 2010, the chandelier was sold to an undisclosed buyer in Paris and left Australia for good.

Can anyone tell me where this photo of the Regent chandelier and Three Graces statue is from?