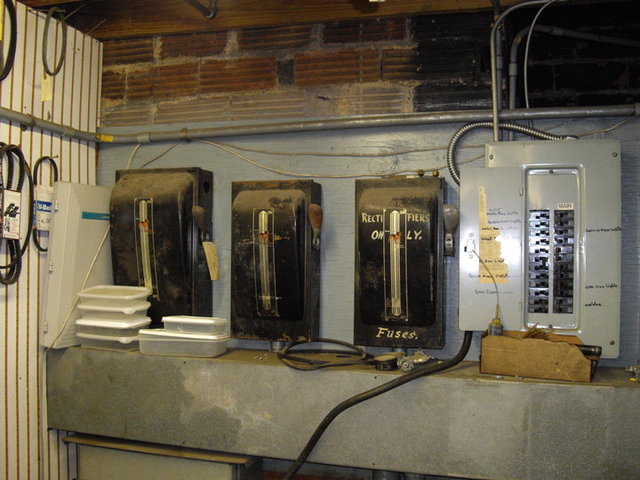 On the back wall of the theater (stage area)… I took this photo showing both the old and new power panels. Of particular interest is the one labeled “Rectifier Only Fuses”. With the old projectors, you had a rectifier to power the “welding rods” used to light the projector. To simplify the explanation… we had two projectors. Each held a 20 minute reel. When placing the reel, you’d lift an arm within the housing. The arm went to a bell. As the film wound down to about 3 minutes, the arm would swing and ring a bell with a single “Ding!” telling you that you had a change-over coming up. The rectifier powered two “welding rods” (carbon rods) in the back housing of the projector. You’d need to make sure you had enough “welding rod” to cover the 20 minutes. The door to the housing lifted up and a was on a hinge. The rear rod had a parabolic shiny reflector to help bounce the light (very bright welding flame) towards the front opening of the housing where it went past the film (in the film gate) and through the lens towards the screen. Prior to starting the film, you’d look through a small piece of welding glass (highly tinted) and “tap” the rods together which would produce the burning reaction. You kept them about ¼" apart, and two motors would (hopefully) ensure they stayed that distance while they burned down. IF this didn’t happen, you’d know it! If the rods burned too quickly, the gap would widen between the rods and they’d go out… which resulted in loud “boo'ing” from the crown. If they burned too slow and the rods eventually touched, it would also go out (resulting in the same “boo'ing”), PLUS the rectifier produced the most gawd-awful “hum/buzz/scream” as the power was shorted between the rods.