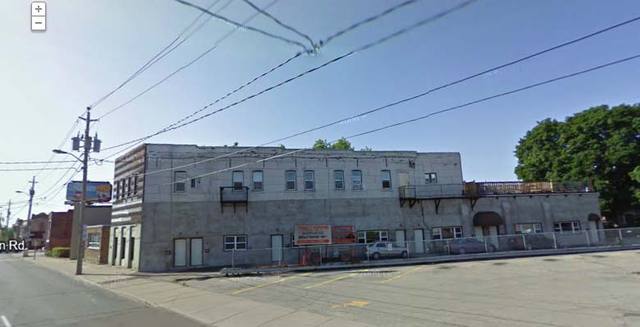 This is the side view of The Mount Dennis Moving Picture Theatre. Only known reference is The Toronto Directory of 1922. You can see where the screen was and backstage area. It was the archetype of early long building cinemas long forgotten except for mentions made to this man as a child by my father E.C.Wright d.1991 and Robert Bud Nevin. The original marquee was in palce until mid – late 1970s. The DeGroote family business took over the site in the 1960 until the 1990s. If anyone knows them or has photos they would be appreciated.

This was 1006 Weston Rd. Between Dennis Avenue and York Avenue. Right beside The Legion Branch 31.

Newly discovered research in The Toronto City Directory of 1921 gave the name to this theatre. It was called The Maple Leaf Theatre. The other was at 94-96 Queen St. West. A.J. Milton Bean was the proprietor and lived at 97 Lambton Avenue (No longer there – Viele Bros Garage formerly Mount Dennis Supertest Motors or Joe’s Fish and Chip Shop, destroyed by arson in the mid 60s. But great Fish and Chips. And five minutes stroll, up Guestville, right at Dennis Avenue, past the school, turn left at Weston Rd.and you’re there at his theatre, The Maple Leaf Theatre. (The Entertainment Hub of Mt Dennis in the late teens and 1920s, one would imagine. No TV, radio just starting, telephone lines barely being installed, great places to tie up the horse and buggy, the radial line went to Weston and Woodbridge. What more could you want in 1920 but a real live Moving Pictures Theatre. That was modernity.

I have found a Toronto City Directory of 1918 with a reference to this theatre in the Theatre Ads. Both theatres (Mt Dennis 1006 Weston Rd and Queen St 94-96, are listed.).So this was around before The Mount Dennis Theatre. No if we could only find some actual photographs, it’d be grand. Why doesn’t someone go to the building and see, politely of course, if they can go inside and take pictures of whatever theatre stuff is related. There might be architecture still remaining inside. Add the pics here.