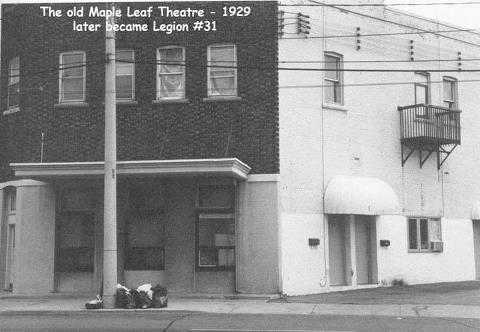 Here is a photo of The Maple Leaf Theatre of Mount Dennis. This photo (John Manzietta, contributor)has the old marquee still attached. Wording should be changed. The Legion Branch 31 Mt Dennis may have used this building before their building was completed in 1953.It was not The Legion itself.

John Maniezza is the contributor. Sorry for the error John

The Maple leaf Theatre was also called ‘'The Bug Rush’. Pam Boyd’s mother (d.) who was born in 1914, provided this info through Wayne Cook. Given that the mother was born in 1914 and probably started going to the theatre in the mid 1920s, this name had been around for awhile.So it may have had a history because The Maple Leaf Theatres were mentioned in Toronto Directories before 1920.This building is still there. (29 Jan 2014.) Teddie.