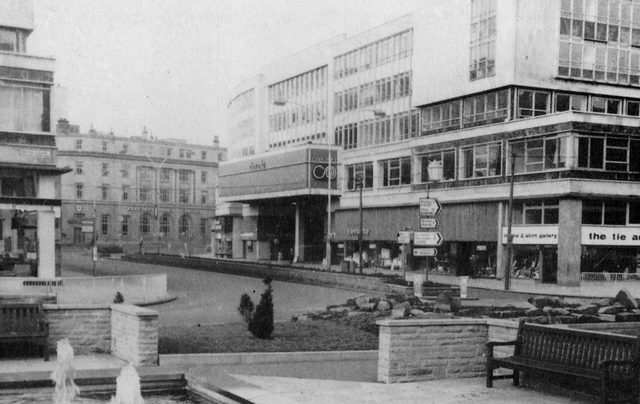 The cantilevered feature over the entrance to Forster Square station was a floor to ceiling, glazed retail display feature that was never used as such. The Penthouse Club was at the far half with its entrance visible at pavement level. The CineCenta was in the nearer half with its entrance at pavement level on this side of the opening (but hidden by the ‘Electricity’ showrooms and the lamp post). There were a lot of stairs to climb (and I seem to recall carpeted walls making for a claustrophobic space).

I’m delighted to see this photo yet full of slightly painful nostalgia. The Cinecenta was a well-known and popular cinema in Bradford. I seem to remember that logo was in purple. My father took me to see 2001 there in what I can only imagine was the mid-70s. Lovely photo, whoever posted it – thank you.