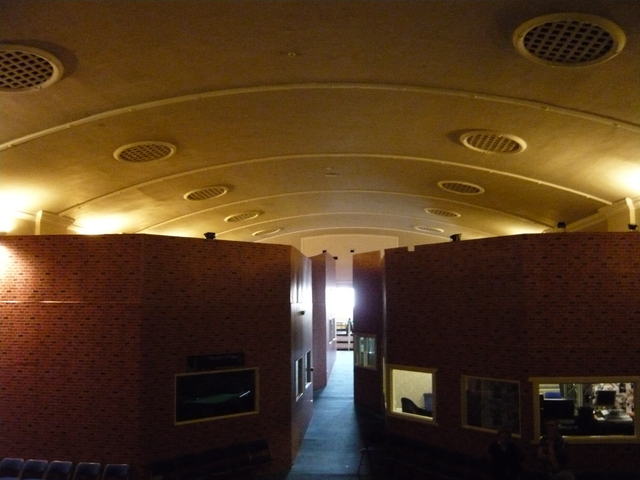 House lights hung from four of the grilles. The first I recall were the Star Cinemas house-style of five-pointed stars in the horizontal cross-section. They were replaced around 1960 by drum fittings against the grilles, which gave a very stark light. I may be being misled, but the two small dimple shapes at the height of the ceiling curve are probably where two naked, clear light bulbs hung: the cleaning lights. Occasionally, someone would flick a wrong switch and their glare would hit the atmosphere.

Light through windows at the back shows how the seating extended to the very rear wall. There was a stepped seating area under the projection room. All those seats were doubles, very plushly upholstered. However, the occupants had the disruption of rear cross-aisle traffic interrupting the view of the screen. It occurs to me that, originally, the region under the projection room may have had a number of elevated family ‘boxes’ (the rear of the circle at the Torbay Cinema is an example); ripping those out at the 1933 refit would account from how an additional 37 seats were fitted in. It’s an idea!