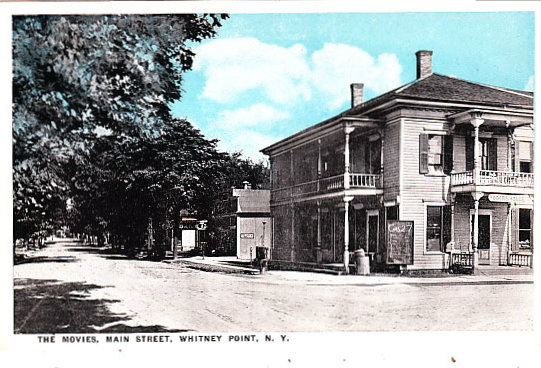 Answer to the above query:

I did a lot of research on movie theatres in upstate New York in the ‘70s. The information I had on Whitney Point was sketchy, and the following comes from memory. But my recollection was there were actually TWO theatres in Whitney Point, one that was active in the 1930s-50s (that I believe was called “The Point Theatre”) and a second one that was around in the mid '20s (that if I remember correctly may have been called “The Hippodrome”). My father bought the newspaper in Whitney Point in 1960, and the theatre was defunct by then. I was never able to exactly pinpoint where either of these theatres were, though the later one was said to be somewhere on Main Street. The picture above furthers the mystery, since it’s unclear just what we’re looking at, but if it shows a theatre, it is probably the earlier of the two, but the location and the legend “The Movies” are both mysterious. Nearly all of Whitney Point’s Main Street is brick. The type of buildings and construction more closely resemble those of nearby Lisle. The frame building looks more like an hotel/tavern than a theatre.

This building was on the corner of Main and Railroad Street. It is remembered as a derelict abandoned building that was still standing in the early 1960s, but was torn down, shortly thereafter, for a NAPA autoparts store. This building either survived the fire of 1897, or was built after the fire. No one in my Facebook WP memories group remembers what it was used for pre-abandonment. There was one vague memory it may have been used as an antique store just before it was closed up, but they weren’t sure.