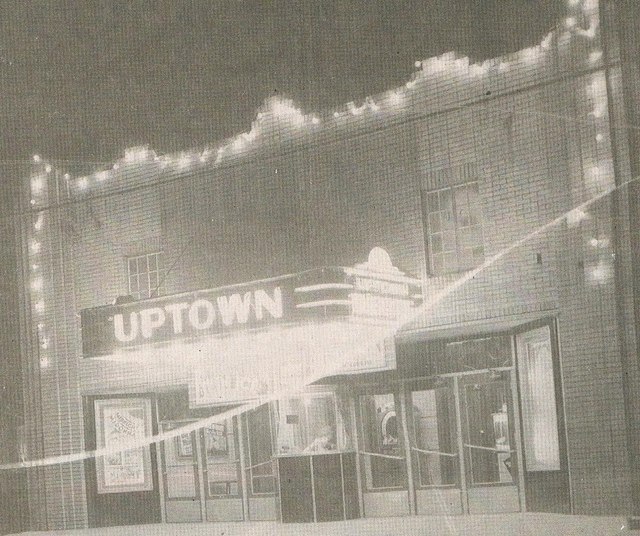 Joseph Goldfarb, who also sold shoes and dry goods, bought a piece of land from Dr. J.P. Hale around 1933 or ‘34, began building a theatre on it in spring 1935, and opened the Uptown in 1936 – just a few doors down from the Gem, a theatre it eventually ran out of business. Goldfarb advertised air conditioning, steam-filtered heat, and “comfortable leather seats.” The Alton Telegraph described the Uptown as “a brick building decorated in front with glass and a canopy over the ticket booth.” The interior was “finished in modernistic style on the walls and ceiling (done in Nu-Wood by A.G. Sewing) … and Western Electric wide range sound.”

There was also a midnight show (at 11:30, actually) on opening night.

The Uptown closed temporarily during the union flap of 1954 (see Norside), shutting down on May 4 and reopening two days later. That fall, it began advertising a new panoramic screen.

On Saturday, May 28, 1967, after showing “Maya” and “Agent of H.A.R.M.,” the Uptown closed for remodeling. When the doors were opened on June 30, Alton residents were advised to prepare for “an exciting new dimension of entertainment … within distinctive and tasteful surroundings.” Now owned by Mid-America Theatres, the venue was now called the Cameo. The inaugural feature was James A. Michener’s “Hawaii” – “Direct from its record breaking road show engagement.” The first showing was a 2 p.m. matinee.

Michael Neal was the manager until at least 1969, and by 1974 the Cameo was run by Ralph Butler. Greg Stanfill took over from 1975-77, followed by Vernon Shaw. Joseph Shaw was the manager in 1982, and Lee Kissier in ‘83. No manager was listed in the Alton directory from ‘84 to ‘87. The theatre had joined the BAC chain in 1983, and Kerasotes bought it in 1987. After just a few months of operation, the new proprietors sold the cinema, which was torn down and replaced by a Hardee’s restaurant.