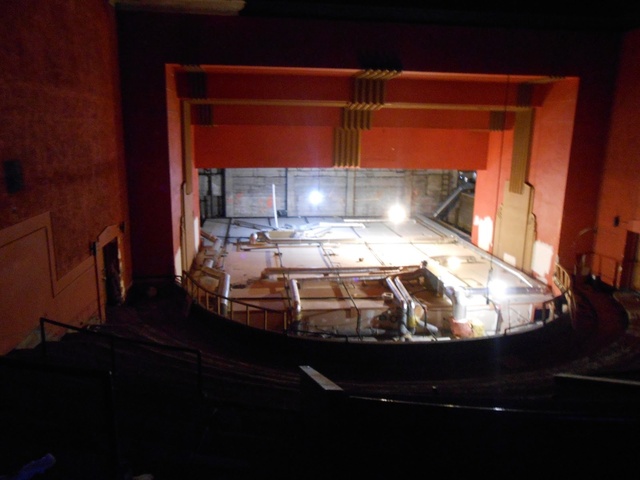 Market Street Cinema from the balcony, showing how they built the strip club in the auditorium, stage, and lobby. They left most of the auditorium intact. I want people to know that there is in fact a classic movie palace hidden in the building and it should be preserved. I got this photo from a ghost hunters site, as the theatre seems to be quite haunted!

I wanted it to be preserved but your report here is erroneous because the classic architectural details that existed at its origins were destroyed in the 1967 remodel by Loewe’s when they acquired the building from United Artists. The facade on the outside was permanently altered to appease the stripper joint it had been forced to become in 1972 as the Imperial was violated by shifty shucksters in shameful depravity as the neighborhood around it was neglected. As of today it’s been slated for demolition because the National Historic Landmark status it was issued in 1986 was classified as an INTRUSION which means it was not only stripped of its dignity but now is losing its crown and promise for eternal protection. The city feels there is nothing left in her worth saving to merit holding the parking space she’s occupied for 102 years. Goodbye Grauman’s Imperial. If it’s haunted, I hope they hang around after the new property is built. All this time, I thought the ugly facade was just hiding the original underneath until it could be removed This news of its pending demise has come as quite a shock to me and I am emotional for it implications about the bigger picture. pardon the pun.