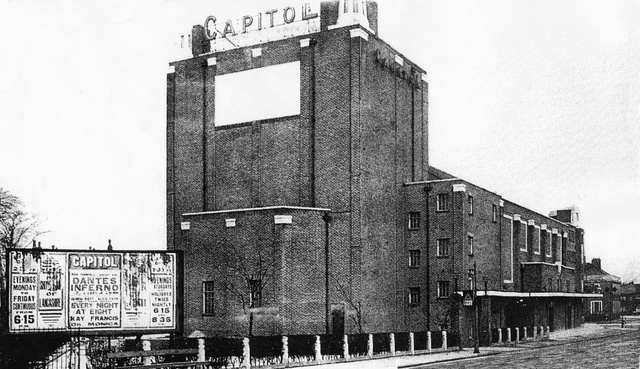 A view from the stage/fly-tower end. “Dante’s Inferno” was released in the USA in August 1935, so the photo shows the wider, rebuilt, auditorium.

Dennis Sharp gets his photos wrong in his book “The Picture Palace”. On page 160 he has a photo of the entrance of the Capitol with it showing “Dante’s Inferno”; and on the next page he has a photo of the exterior of the still-smouldering, fire-damaged auditorium. He captioned them, respectively “Before and after the inferno”. But “Dante’s Inferno” was screened in the rebuilt cinema.

The re-opening night was 16 August 1933, with stage show, organ, Universal News, and “Leave it to me”. The latter a 1933 British film starring Gene Gerrard (who?) - the guest of honour that night! The opening night souvenir programme made great play of the extensive use of (fire-proof) asbestos in the rebuilt auditorium. I often ponder on the consequences of the unseemly haste with which the demolition occurred.