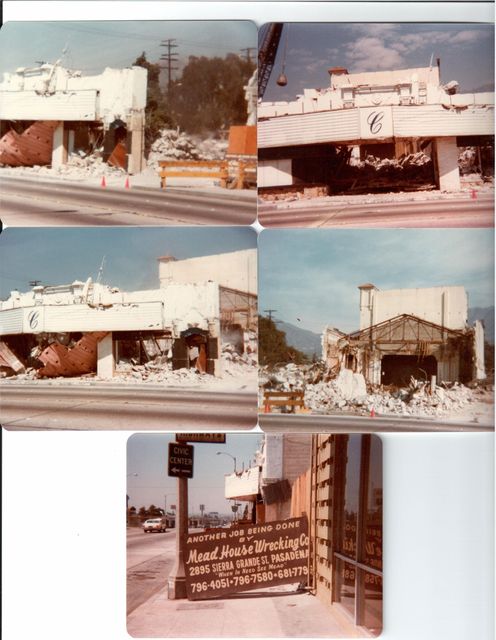 My name is Greg. My business partner, Tom (a Jamaican) and I (Caucasian)operated the Crest Twin Cinemas for a short time around 1975. We had a difficult time re-opening it after a previous operator had showed X rated films. The City of Monrovia shut them down for not having enough off street parking. Tom and I each had young families and wanted to own a family theater. We convinced the City of our holsum intent and secured the parking needed from businesses close by who believed in us. The 70’s was a very racially charged period and the theater was in a predominately white neighborhood with the City of Duarte, predominately black, only a quarter mile south. We opened as a dollar a seat theater and showed many what I’ll call “white” movies including The Towering Inferno. I never understood why the kids and adults wouldn’t patronize the theater…perhaps it was due to the previous operator and the X rated stigma or maybe it was my black partner. We were headed for closure due to lack of business when Tom, who had connections with CBS in the Mid West, arranged to have Ken Norton, the boxer and actor appear at The Crest for the release of a big movie he starred in called Mandingo . From that night on, we packed the house nearly every night with terrific, generally very respectful patrons who came up from Duarte. I remember being the only white person in the theater filled with over 1000 blacks. We all got along great. I remember dragging the box office and snack bar tills and walking through the lobby with bulging pockets. They would joke and say things like “hey Red, where you going with all that”. There never was an incident or a time I felt threatened. It wasn’t long before all these blacks angered the residents of the sleepy white neighborhood where the Crest was. One night, when the front of the theater was crowded, a van pulled up, the door slid open and a white kid fired two shotgun blasts into the crowd and drove off. No one was killed but as I ran out onto the roof in back of the marquis I observed the terror in my patrons as they scattered for cover.
Everyone we talked to knew who did the shooting. He did it from his brother’s van but the Monrovia Police never could figure out who did it. The word in the black community was the police didn’t want to know who did it. Just like they didn’t try very hard to investigate the supposed “suicide by hanging” of a black youth in their jail a short time prior to this incident. That part about the hanging in the jail was heard from the black community at the time. Our business was ruined and we closed a month later. To this day many of my best friends happen to be black. But, then again, I never thought of them as being different from myself. I am encouraged with each passing day as I believe the old racial hatred of blacks by whites is dying off with the generations that propagated it.