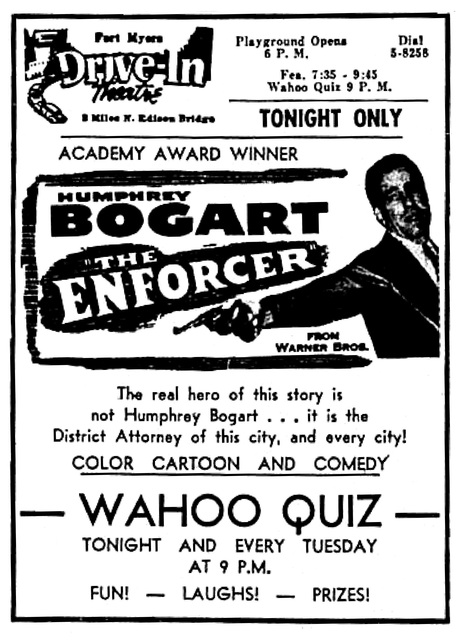 March 25,1952 In addition to the movies being shown, they were offered a game called Wahoo. Patrons were handed a Wahoo card at the ticket office, one for each occupant of the car, as they paid their entrance fee. Wahoo cards were similar in appearance to a bingo card. After the first feature was over, a dial similar to a compass would appear on the movie screen, while over the speakers a voice would give instructions on how to play the game. The arrow would be spun on the dial. The number pointed to by the arrow would be called off. Patrons finding that number would punch out a perforation below it. To win, the numbers had to be in a straight row across or up and down or diagonally, just like conventional bingo. When someone would win he or she would beep the car horn twice. Prizes and money of various amounts were given, with jackpot payoffs sometimes reaching a thousand dollars or more. To win the jackpot a person had to Wahoo on the first five numbers called. If no one won, the jackpot grew.