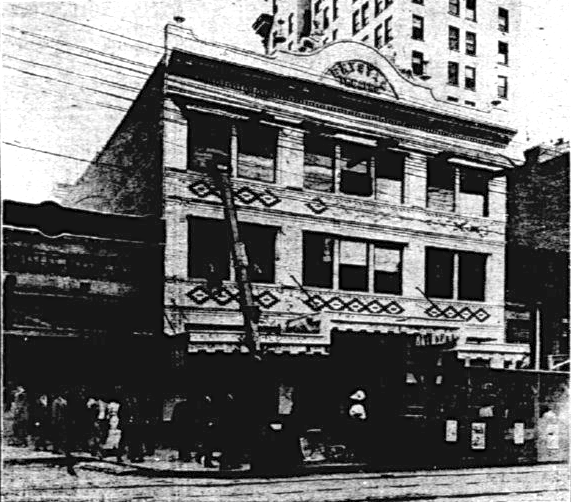 “New” Crystal Theater on opening day, Sept. 25, 1913, opening with “A Sister to Carmen”. Unlike the previous Crystal which was built for live presentations and converted for photoplays, the Crystal was designed for the film medium. It had 600 seats and a Japanese love story desgined motif. It stood with the Queen, Hippodrome and Washington as downtown’s best moving picture houses. It had a 15-year lease and ended as a silent picture house with specially equipped $10,000 Wurlitzer pipe organ. But the motion picture industry and the size of theaters had passed the Crystal by at the end of its lease – as it had the previous incarnation of the Crystal.

I found one date that it opened in 1911 at 1608 Elm (previous owner of property was a Theodoro Bragni in 1920 listed at what was then numbered 370 Elm which later became 1608.) Part of a chain of Texas theatres owned by G. K. Jorgensen. It also had the first Wurlitzer organ installed in the southwest. Had a small Wurlitzer at first then in 1917 a larger Wurlitzer was installed.