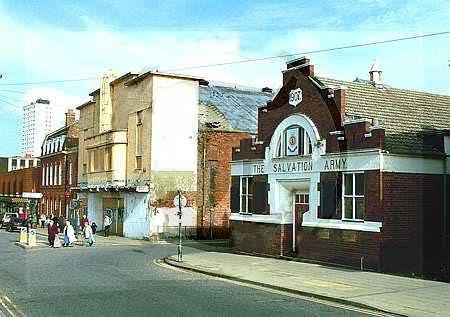 classic when it was the palace 1900s

My Aunt took me to see The Yellow Submarine film in 1968 at the Essoldo Cinema and afterwards I had my first Chinese meal. I

In spring 1972 they staged an all night Beatle’s Film fest one Saturday night, from around 10pm. I went along with my then girl friend and here sister.

After the end of the first film which I think was “A Hard Days Night” a local band came on stage and played late fifties and early sixties hits. I have always remembered their rendition of “The night has a Thousand Eyes.”

After watching “Help,” “The Yellow Submarine,” and “Let it Be” we left very tired at about 6.30 in the morning. There was no bus and we walked home to Ashby. The sun was up and it was a nice morning and I remember talking about how it must have been for those who were lucky enough to see the Beatles and the Cavern in the early 1960’s and walking home after talking about it. Even though the Beatles don’t actually star in it The Yellow Submarine is my favourite.

It would be interesting to know if anyone else remembers this.