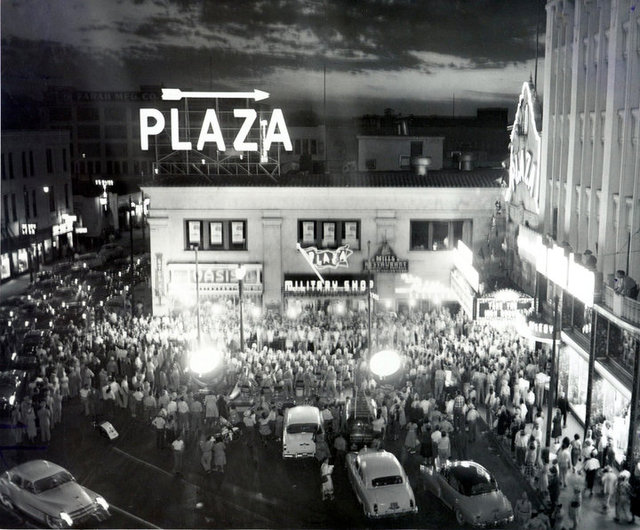 “A huge crowd accompanied the opening of the Plaza Theater on September 12, 1930. Designed as a modern film house with the flexibility of presenting stage shows, the Plaza eventually hosted popular traveling shows and movies. Its size (capacity of 2,410), elaborate decor, and technical innovations made it stand out: While the exterior facade was designed to be reminiscent of a Spanish mission-style parapet, patrons were awed by the interior, with its intricately painted ceilings, mosaic-tiled floors, decorative metal railings and sconces and antique furnishings (Spanish Colonial Revival style). Additionally, the Plaza offered electrically cooled drinking fountains, a nursery, a $850 marble and brass telecheck system that alert ushers when a seat became vacant, and a Brenograph machine that could throw over a thousand color effects onto the black-and-white scenes. However, in the 1950s, the Theater’s patronage declined and by the 1970s it was sold. In the 1980s, the El Paso Community Foundation saved the Plaza from demolition and donated it to the City of El Paso in 1990. After, it was restored to its original splendor and today hosts concerts, shows, musicals and plays once again. ”