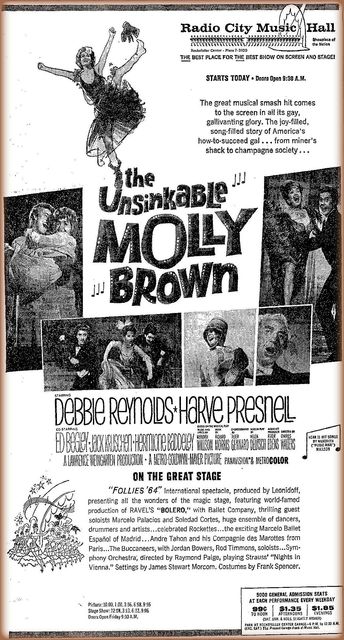 It was said at the time that the casting of the title role of this movie broke the heart of Tammy Grimes, who had hoped to re-create her Broadway stage triumph playing Molly Brown on the screen.

I hope they played a 4 track mag stereo print of this film on the giant stage screen. MGM made a few stereo prints. It was so sad in Oakland CA at the Fox West Coast Paramount were I worked in High School they had a huge true sneak preview of this film way before the film was ready and was shown at the Paramount in full stereo with the MGM sound people with a box in the seats adjusting the sound mix. It was a night I will never forget as I remember all the surround speakers came on during the echo part and some music numbers. Well months later when Unsink Brown opened the manager MR Apple was shocked that they only sent a MONO 35mm print. He called to complain and MGM said they only made a few 4 CH prints. SF got one but I guess they thought Oakland was not such a big city. Must have sounded great in NYC as I bet they played It in stereo. Does anyone remember seeing this at Radio City and was It in stereo sound with surrounds Thanks Terry

My Grandpa Joe took me to see this show on my first trip to the Hall. It’s almost fifty years to the day!