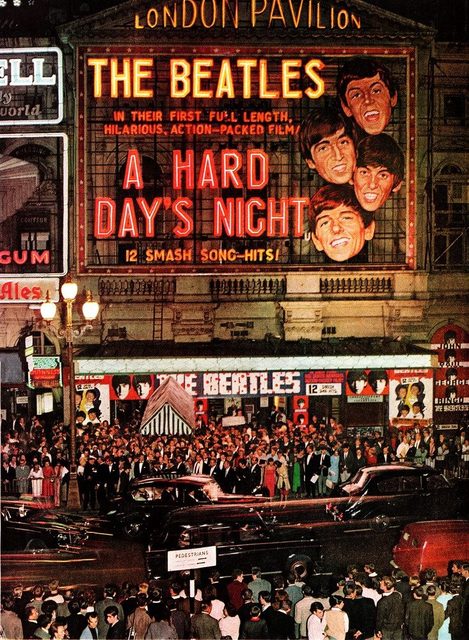 HARD DAY’S OPENING NIGHT – A crowd swarms outside the Pavillion Theatre in London on July 6, 1964 for the world premiere of The Beatles' first film, A HARD DAY’S NIGHT.

Per IMDB: “United Artists executives didn’t really care about the film itself, they were mainly interested in exploiting a legal loophole which would allow them to distribute the lucrative soundtrack album. In fact, they fully expected to lose money on the film. With a final cost of about $500,000 and a box office take of about $8,000,000 in the first week, "A Hard Day’s Night” is among the most profitable (percentage-wise) films of all time. "

“The whole of the original first day’s shooting (the train sequence) was lost because the clapper-loader was mistaken by fans at the station for one of The Beatles. In running away from the screaming fans, he dropped the cans of negative.”

“The Beatles record producer George Martin got an Academy Award nomination for his music score in the movie, but The Beatles themselves weren’t nominated for their music.”

“United Artists was pressuring the producers to finally come up with a title for the film. When John Lennon told producer Walter Shenson about Ringo Starr’s malapropisms, Shenson thought that Ringo’s phrase "a hard day’s night”—referring to his resting up after an exhausting day—might make a good title. John agreed. Shenson called United Artists with the proposed title, which was coolly received. Shenson suggested that they ask the secretaries and other young employees, who might be fans of The Beatles, what they thought of the proposed title. The suggestion worked and the title was accepted."