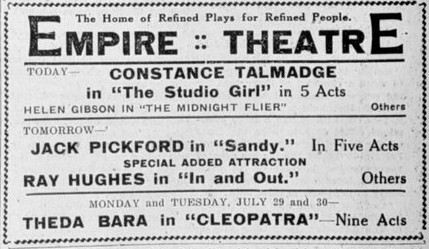 The Empire was built in 1916 and closed in 1978. It was also known as “Leo’s Empire” It was solely a motion picture theater. Two castle- like spires are located atop the theater. It was completely renovated in 1940. They added air conditioning, a new stage, and a new marquee. It was later owned by Mrs. Emily Ellis of Manhattan. The Empire was always known for showing foreign films. This theater was built and operated by a Mr. Henry Hyams Sr., a well-known auctioneer from State Street Brooklyn. He also built and operated the Park Theater in Stapleton as well as a theater in Brooklyn.

Before its demise, it resorted to showing adult films, much to the dislike of the neighboring residents.

Farrell Lumber has owned the building since 1978 and uses it for their supplies.