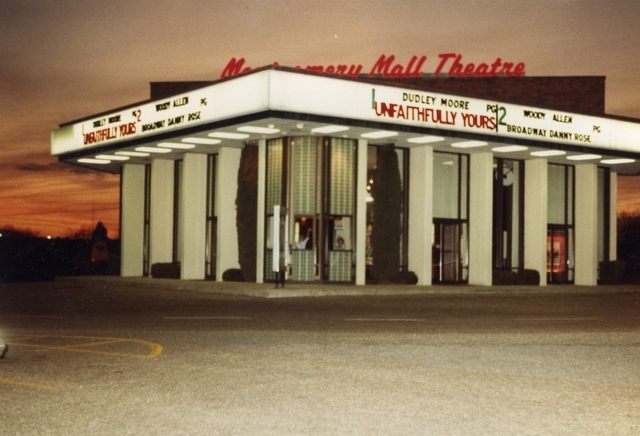 I was the manager there and took this photo.

I remember when the Montgomery mall open, this was way before this theater open. They kept on advertising that it was going to be open in the Montgomery Mall.It was misinformation.It opened the Mall building. I remember the grand opening of it. This was the first time seen a theater with 146 degrees curved screen and stereophonic sound, since Dallas texas at the melbas Capri, when I saw How the West was won.It was not a three projector theater with 70mm, but 70mm only.Although in 73 a single strip version of this is Cinerama was reissued, it never played here.In the grand opening, it included a short to demonstrate ultra vision 70mm. It was kind of a single strip short version of this is Cinerama-style type film, at the time it got me dizzy at some of the scenes, Unfortunately, they had premiered a small screen boatnecks.It wasn;t until I saw Paint your wagon in 70mm and stereophonic sound that I experience the whole wide screen. I finally saw the 70mm Cinerama a version of Patton with it stereophonic sound when it was reissued hear a year later, It was played in Panavision and mono at the Paramount theater know Davis theater.I also saw the 70mm premier and stereophonic sound American graffiti mere too. I saw it a year earlier in small screen and mono at the the Martin Twin.I also saw the prmeire of star wars in 1976 in mono sound, since the theater did not have Dolby, but it fills the huge screen.I was sad when it made into a twin .I did see for the first time the 1976 reissue of it came from outer space and the creature from the black lagoon in 3d, but, it was not Polaroid.It was in anaglyph process.I had thought this was the way real 3d movies were.I sure enjoyed that theater in it’s earlier form.