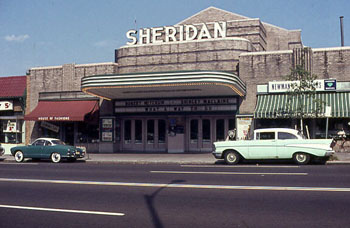 Missing from this photo are the streetcar tracks and trolley wires of the 7th St./Georgia Ave. line, which have just been removed. Virtually all of the movie houses in and around Washington were built along streetcar lines. The fare when I was growing up was a dime, with a free transfer. During the day, you never had to wait more than 5 minutes for a car, and only a little longer at night or on holidays. Originally, the Georgia Avenue line ran from the 7th Street Wharves to Four Corners, MD, with spurs at Soldiers' Home and Takoma Park, DC. A lot of the trackage was abandoned in 1935 when the three existing transit companies merged into Capital Transit It was an exciting ride for a small boy, much better than a tour bus. I understand that they’re planning to build a new streetcar line on 7th St./Georgia Avenue. Maybe it’ll revive Brightwood and give the Sheridan a new purpose.