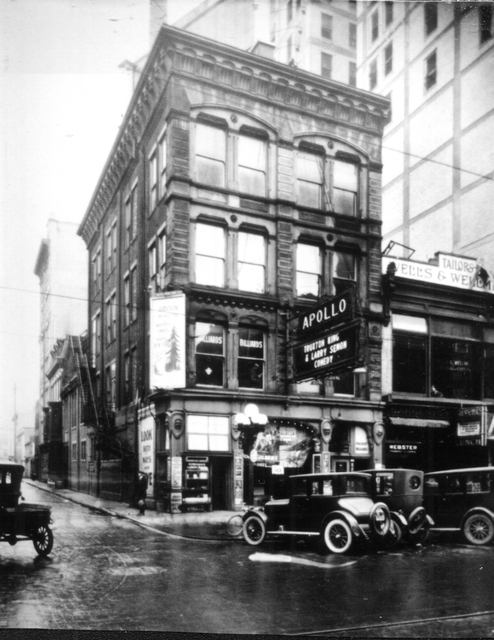 It was closed on December 19, 1935. On January 11, 1936 with new owners it was reopened as the Little Playhouse, presenting arthouse movies and occasional plays. The Little Playhouse closed on June 9, 1940 and was soon demolished. The RTA is now on site.

22-year old Theodore C. Chifos launched the Apollo Theatre on February 28, 1914 with the film, “The Conspiracy” starring John Emerson. Its motto was “Pleasing pictures properly presented.” The Apollo converted to Western Electric sound on April 19, 1931 along with the Columbia Theatre. The Apollo closed likely due to its owner Henry Burkhardt’s passing on December 19, 1935 with, “We’re in the Money.” Herbert Byrd relaunched there as the Little Playhouse opening it as a 356-seat art house on January 11, 1936 with Douglas Fairbanks in “Mimi.” It was also going to have live plays in the mix. The Little Playhouse then closed with “Dodge City” on June 9, 1940. A salvage sale by the Cleveland Wrecking Company starting three days later.