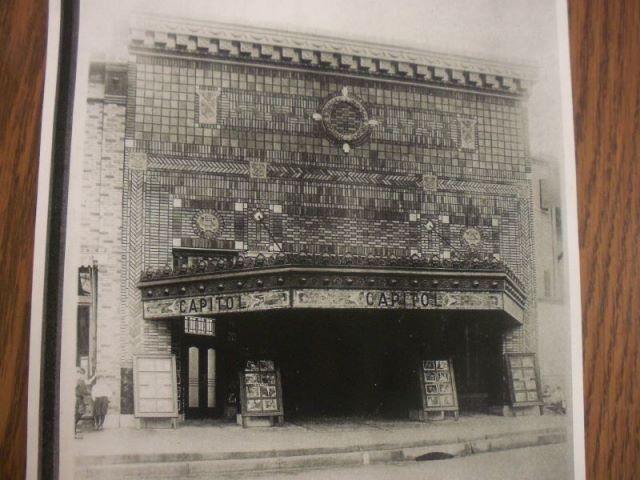 I just found out about this theatre in the archives at the Western CT State University Library. I was doing research and found the following advertisement in the 1924 yearbook, titled, The Anchor, a publication of the Danbury State Normal School.

The New Capitol Theatre was opened on August 11, 1923 with Claude Gillingwater in “Three Wise Fools”. The building still survived in May 1971 when it was put up ‘For Sale’.

The Capitol Theatre was the “bargain movie house” when I lived there. Priced much lower than the other two house, the Palace and the Empress, the Capitol was always good for a cheap double feature and during the depression days of the 30s – they had their “dish nite”

I’m very happy today. I was doing research at the Danbury Museum for an unrelated project the last few days and found many pictures of the Palace, Capitol and Empress Theatres, and not just the traditional “Images of America” book pictures. I’ve found countless viewspoints including aerial!!!

Unfortunately, I cannot post pics still, so I’ll send them over to Roger Katz. For folks interested in these great black and white and some color photos, I’d be happy to email them to you in a zipped file. They are great.

I have great shots of the marquee AND the stagehouse of the theatre. This was virtually impossible on the traditional photos I’ve seen of the Capitol, so now I know what it looks like. Nowadays, of course, it’s the parking lot behind DaSilva Realty and across from Cousin Larry’s Cafe.

Even though the City Directory says they closed in 1959, I have picture proof that the stagehouse and lobby remained safe and sound until at least 1964.

From the up close view of the Capitol that I have, it says “New” just above the Capitol sign. Therefore, it was also known as the New Capitol Theatre.

I struck gold! I was researching today for a doc I’m producing and Diane at the Museum showed me photocopies of pics (the person didn’t want to donate) of the Capitol’s exterior and INTERIOR! Not ornate at all.

I’ll post them later today. (I also have one of the 1934 blizzard with the Empress and Palace marquees visible).

Posting a new pic from 1948 with what Elm Street used to look like.

From a Danbury News Times article I just posted in the photos section, the building was still standing in May ‘1971 when the lot went up for sale.

The September 1, 1923 issue of Moving Picture World said that the new Capitol Theatre in Danbury had opened August 11 with the Goldwyn production “Three Wise Fools” as the feature attraction. The wording of the article makes it clear that the house, which was owned by the Taylor estate, was entirely new and had not been seem by the public before.

The appearance of the name Taylor Theatre at the Capitol’s address in the 1923 city directory was likely the result of the fact that the directory went to press while the theater was still in the planning stage or under construction and the name Capitol had not yet been chosen, so the publisher used the name of the owners of the project. There’s no evidence that the house ever operated under the name Taylor Theatre.