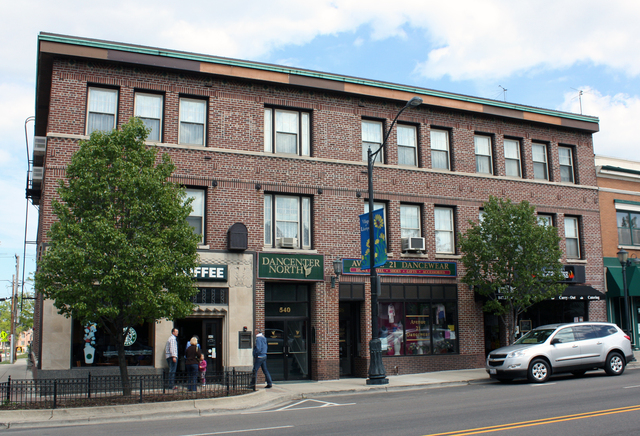 This short-lived movie house, located in the Gridley Building on Milwaukee Avenue, operated from around 1930 until 1937, when the new Liberty Theatre opened.

There is a photo circa 1920s on this page:
http://tinyurl.com/otmkh8

PLEASE CHANGE THE ADDRESS TO:

Just Milwaukee Avenue is about 2 miles too far South on the map.

It will still not map exactly correct, you will not see the building. You need to change the address to 586 to see the theater building?

From the early 20th century, several theaters at one time or another served Libertyville: the Lyric Theatre, an earlier version of the Liberty Theatre, and the Auditorium Theatre. The immediate predecessor of the current Liberty Theatre was the LaVilla Theatre on the second floor of the First National Bank building. The LaVilla had only hardwood seating and a screen which would roll up when not in use. One can imagine this did not meet the standards that the movie-going public of Libertyville was coming to expect. Frederick William Dobe, born in Germany in 1873, had emigrated to the United States at age 19 in 1892, eventually settling down in Libertyville. While the LaVilla Theatre on Milwaukee Avenue served its purpose, Dobe sensed a desire on the part of the townspeople for a dedicated theatre and a potential business opportunity. Dobe polled the community to see if they were happy with the LaVilla and found that the citizens of Libertyville were indeed looking for a more luxurious moviegoing experience, Dobe contracted Chicago-based architects Edward P. Rupert and William L. Pereira to design a theater befitting a town of Libertyville’s stature.