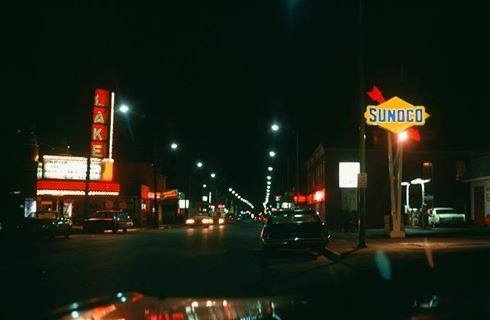 The Lake Theatre opened on the day Adolph Hitler invaded Poland, September 1, 1939. In fact, in the daily newspaper, the Lake Theatre’s opening was above the invasion headline. Nothing like this was ever seen in Painesville. A 1,550 seat theatre with no balcony. It was a Streamline Moderne style masterpiece.

I went to The Lake as a kid and I don’t remember it as being art deco. I was just a kid, but I think I would have noticed if it was an “art deco masterpiece.”

The theatre can be seen in the movie One Potato Two Potato, which was filmed in Painesville.

Around 1968 I remember my brother and I going to Lake Theater. I was about four years old at the time. The smell of the popcorn was the best. I think you could stand up by the water fountain and food area and still see the movie from a distance. I remember the water fountain we drank out of. There were mirrors on the wall behind the fountain. I was mesmerized by the glamour and beauty of the interior of the building. I don’t know if it was every Saturday, but one particular Saturday morning they gave away prizes at some point. I remember losing my
favorite blue, knitted, poncho in the theater. During the Urban Cowboy era the theater was called “The Urban Cowboy.” My Grandmother Josie Schrader used to work down town Painesville. Luckily I was able to visit her while at work. I remember all the older buildings that are no longer there including the Lake Theater. Such a sad thing to tear down such beautiful, historic, buildings. I have a picture of my other Grandmother, Jewel Coppinger and her sister Edith walking down South State Street towards the old Lake Theater. In the background you can see a sign for Lane’s Drug Store.

The February 18, 1939, issue of Boxoffice said that work had begun on a new theater for Schwartz and Shulman in Painesville. The architect was George Ebeling, of Cleveland, who designed many other theatres in Ohio. The Lake was listed as one of Ebeling’s designs in his obituary in Boxoffice of November 21, 1951.

I was an usher at this theatre for several years in the early 1970’s. We were paid a whopping $1 an hour (but we got to watch all the latest releases). This was partially because we were all underage, but I’ll try to stay on topic. The theatre was magnificent. Yes, it was art deco, but on a very small scale; not a “masterpiece” like some of the old theatres here in the Chicago area. Ticket prices in the 70’s were $1.25 for adults and $0.75 for children.

Let’s take a tour, shall we. As 14 year olds, we left very few areas of the building unexplored. There were secret storage rooms off the main lobby, up the ladder behind the marquee, small, tight tunnels below the seating for plumbing and heating pipes. It was fun to crawl beneath the theatre floor knowing there were hundreds of viewers right above us. The projection room was cramped, dirty and smelly, but functional (with dual projectors). The stage in front of the screen was large enough for small stage shows. No stereo, surround, Dolby or THX; just one enormous speaker cabinet directly behind the screen. The screen actually had millions of tiny holes in it. You could stand behind it during a movie and look out and clearly see all the audience as if no screen were there at all, due to the reflected lighting from the projector. Saturday nights were special. Saturday night was called “Bank Night”. The “Judge”, who was about 200 years old, would be helped onto the stage where he would draw raffle tickets from a large drum. Getting him up there and back took about 20 minutes. It was like watching Tim Conway do one of his skits. The manager’s office had two safes, a large, obvious floor safe, plus a hidden wall safe behind a picture for the real cash. There was a big, comfy couch in there too, where the manager would nap while we all ran the theatre. Yes, the lobby drinking fountains were surrounded with mirrors and many of the walls were velvet or felt or something like that. The outer and inner lobbies were magnificent, with many advertisements for current and upcoming releases. I believe that I remember faux Classic Greek statuettes on the walls in the theatre. I think there were a few strategic Greek columns in the inner lobby/concession area, but I may be romanticizing. There definitely was a little sitting area with a very fake fireplace, complete with red light bulb, just to the left of the concession stand.

The police almost shut down the theatre one time when the controversial “Harrad Experiment” came to town. It was nominally rated R, but bordered on X due to nudity. I remember reluctantly letting in two local cops who watched half the movie, leaning against the short wall dividing the seats from the concession area, before they decided to leave without event.

I have plenty more memories and stories, but those are not for this forum.

This theatre, perhaps along with the old Morley Library and Morley Music Hall, were the cultural highlights of Painesville in those days. Hopefully, that statement can stand on its own.

If memory serves me right, the Lake Theater became The Palace before it became the Urban Cowboy. It housed many local and national rock acts before turning country. I remember seeing Eric Carmen there as well as Michael Stanley and several others. Also, at one point, it became the Painesville Agora, but I can’t remember if that was before or after the Urban Cowboy phase. Every time I drive by there, I think of that theater and that stone wall and iron fence around the parking lot. Also, if anyone is interested, the drug store that took over the site is now closed.

An article about the Lake Theatre appeared in Boxoffice of February 3, 1940.

The house was more Streamline Modern than Art Deco.

I also worked at this theater. I believe it was in 73 I was only there for 6 months. Mrs Bain? was the manager. And yes Kirtlandpat it was the palace I went there when I was 18. 3 2 beer…lol. after the palace it became the Agora. Then Urban Cowboy…I remember riding the bull…lol. Does anyone remember the band that covered david bowie’s “transmission”?