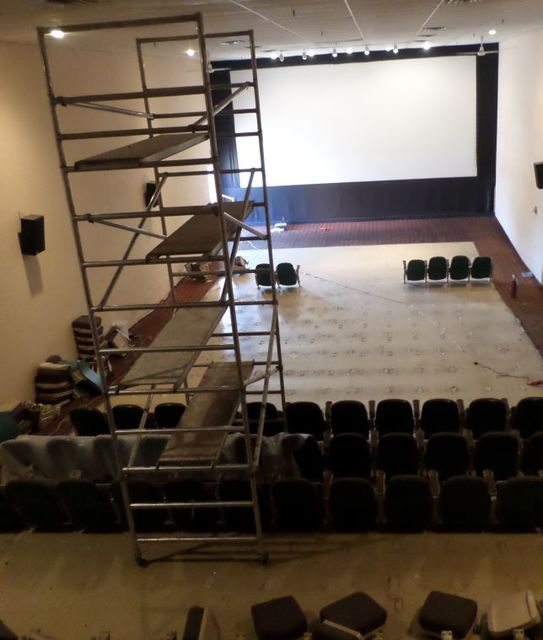 The Sandburg Mall Cinema, a twin operated by the Kerasotes chain, was opened in 1982. It was closed in November 2003 at the same time as the West Cinema after Kerasotes opened their new Showplace 8 near the Sandburg Mall.

In September 2007, the twin reopened as the Blue Moon Cinema, by the owners of the Blue Moonlight Drive-In in Galesburg. The theater closed again, after less than three months in operation on December 19, 2007 and became home to a church, then live theatre, followed by a discount theatre for a short while.

Well no actual “conversion” took place. They use the same seats the theatre did, the only difference is that the Blue Moon operators took the film projector and sound amplification equipment.

In 2015 the non-profit organization AGES Community took over the theaters under a mutual agreement with the mall. All of the seats have been removed and structures built for a haunted house are now inside each theater. It is open in the month of October. The projection and sound equipment has all been removed from the theater.

The Sandburg Mall opened theatre-less on October 1, 1975. The mall was expanded twice, the first of which was in 1982 bringing about the Kerasotes Circuit’s twin-screen Sandburg Mall Cinema near the J.C. Penney anchor. The Circuit would close the long-running and high-visibility Orpheum in favor of running two twin-screen operations creating both this theatre and adding a second screen to its downtown West Theatre.

As the end of its initial 20-year lease at Sandburg Mall was approaching, Kerasotes next decided to close both of its twin-screen operations as it constructed a new multiplex not far from the Sandburg Mall. The Cinema closed on December 18, 2003 along with the West Twin Cinema. The new Kerasotes ShowPlace 8 opened the next day on December 19, 2003.

The Sandburg Mall went into a steep decline as 30-year leases lapsed and original tenants departed. The mall cinema then became home to a church, an events center featuring live shows, a discount theatre launched by the Blue Moon Drive-In operators running just three months from September of 2007 to December 19, 2007, and a haunted house operation.

The theatre was going to be razed in 2017 as a plan to convert the entire mall into an outdoor shopping complex. That plan didn’t materialize and the entire interior of the mall was locked September 29, 2018 after the final interior store, a GNC Vitaman shop, closed. The mall soldiered on with just two exterior-facing businesses, a car repair shop and a U-Haul rental shop as of 2019. There was little hope that the Sandburg Mall Cinema or any other stores would be resurrected.